In this post I will use paraxial optics to mean paraxial geometrical optics. This is important since the paraxial approximation can also apply to the wave theory of light.

When learning a new theory, I often find it most useful to first identify the problem that the theory was developed to solve. This approach is particularly pertinent for learning paraxial optics, since the theory is largely used as a tool to aid in the construction of optical systems. Unfortunately, the fact that paraxial optics can help solve problems often becomes lost on people because they never actually build anything for the purpose of imaging. And even if a someone never builds a camera or microscope, I think it is difficult for them to see what paraxial optics concepts--such as principle planes and aperture stops--can do for helping them troubleshoot their hardware when it is not working as expected.

So, with this in mind, I will use this part in a series of blog posts to answer the following question: what is the problem that paraxial optics solves?

Paraxial optics solves the imaging problem [1]. The imaging problem as I see it is simply this: given an optical system, how can one arrange its components to form the image of an object at a desired position and with a predictable size and orientation? This question has been asked by scientists, engineers, philosophers, and others since antiquity because we place enormous value in pictures.

To better understand this problem, I am going to step through the parts of this statement and explain what I mean by each. First, I mention that the imaging problem involves the use of an optical system. I have to admit that I use this term partly because it is part of the jargon of the optical sciences, but I also think that the word "system" nicely captures the essence of what I would like to say. An optical system is a collection of components such as lenses, mirrors, and prisms taken together with their mechanical supports and arranged in a meaningful way to capture and channel light as it travels from one place to another. Below is one example of an optical system that most people know pretty well. 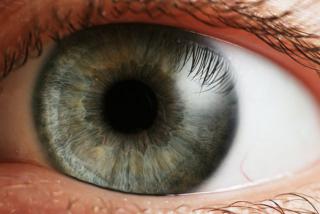 I have already mentioned that the components of an optical system can include things we commonly associate with optics, such as lenses and mirrors, but really no one such component is necessary to build an optical system so long as it captures and does something with light. For example, the pinhole camera uses nothing but a very small hole to form images; no lens is required! Still, we usually find some components like lenses much more frequently in optical systems than others, and the choice of which components to use really just depends on the specific type of imaging problem you are trying to solve.

Next in the statement of the imaging problem I say that we will be forming an image by arranging the components of our optical system in a clever way. Though the intuitive notion of an image is quite clear, I think it is actually extremely difficult to formally define it. For the purpose of this tutorial, I think it is best at this point to rely on the intuitive idea of an image until I have developed enough concepts to define it in terms of optical theory [2].

Finally, the imaging problem involves determining the location, size, and orientation of an image formed by the system. This means that rearrangement of our system's components is going to change these features of the image. Things such as the size of a CCD chip or the weight of a lens are going to place constraints on the values these properties can take. 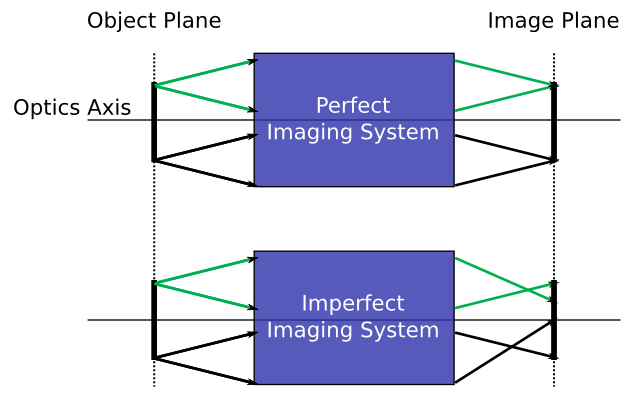 The above figure, which is called a ray-trace diagram, illustrates what I mean by a perfect imaging system. The system is represented as a "black box" that collects light coming from a two-dimensional plane (known as the object plane) and relays the light to another plane known as the image plane. The whole system is considered to be rotationally symmetric about a line called the optics axis so that I can represent it as a two-dimensional sketch instead of requiring a full, three-dimensional model. Finally, light is modeled as lines with arrows denoting the direction of propagation [4].

The way this perfect imaging system is realized within the context of the theory is in the way the components redirect the rays coming from the object [5]. What differentiates /paraxial/ geometrical optics from plain old geometrical optics is the rules dictating how the redirection occurs.

One other important point is to consider what happens in imperfect imaging systems. Once we violate the assumptions of paraxial optics so that we no longer have a system operating within its range of validity, we cannot perform a true, one-to-one mapping of points from the object plane to the image plane. Instead, we find that rays coming from a single point in the object plane cannot all be brought back together in any image plane [6]. We could say that the image plane is a concept that does not exist outside paraxial optics. And if the image plane does not exist, how are we to strictly define an image size and location?

Of course, we can find planes in non-paraxial systems in which there are pretty good images, and these usually correspond to the image planes we find by applying the equations and simplifications of paraxial optics. So paraxial optics is often our first tool for modeling an imaging system. It tells us roughly where our images will be formed and how big they are, but it will not tell us about image quality.

With this tutorial I hope to have provided you with a conceptual basis for understanding paraxial geometrical optics without including too many of its details. I think a conceptual basis such as this is much better than diving right into ray-trace diagrams with lenses and mirros. I think new students to optics often wonder what the importance is of paraxial optics and why it is needed when more complete optical descriptions exist. I hope that the discussion of the perfect imaging system and its existence only within the framework of paraxial geometrical optics helped to clarify its importance.