Note: This is a remake of my original post on pupil functions. I decided to write this remake to fix what I perceived to be some errors in thinking and to better address the problem of units in some of the physical quantitities. For the original, click here.

A pupil function is a theoretical tool for characterizing an imaging system. In simple terms, it is a mathematical model for any general arrangement of lenses and mirrors used to collect light from an object and form an image of that object in some other plane. A few of the reasons why pupil functions are useful include:

In this post I will show you how to write a simple program that computes the image of an isotropic point source of light from an optical system's pupil function.

If we know the amplitude and phase at a given point, then we know the scalar field at that point. Despite the fact that scalar diffraction theory ignores the polarization of light, it does wonderfully well at describing a large range of optical phenomena.

For most problems in imaging, we don't really need to know the three-dimensional distribution of the field in all of space. Instead, we simplify the problem by asking how an optical system transforms the field in some two-dimensional object plane into a new field distribution in the image plane (see the figure below). Any changes in scale between these two planes are caused by the system's magnification; any blurring or distortion is caused by diffraction and possibly aberrations. 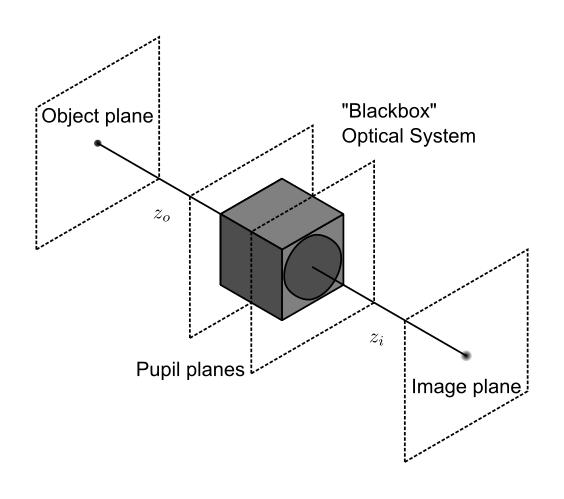 where $ A $ is a normalizing constant, $ f_x $ and $ f_y $ represent spatial frequencies in the x- and y-directions, and $ j $ is the imaginary number. $ \text{PSF}_A \left( x, y \right) $ is known as the amplitude point spread function. Despite the intimidating name, $ \text{PSF}_A \left( x, y \right) $ is just the scalar field from the isotropic point source in the image plane. The pupil function and the amplitude point spread function form a Fourier transform pair, so we can also write

By convention the pupil function is a dimensionless complex number and has a magnitude between 0 and 1. The amplitude PSF, however, has units of electric field, or Volts per distance, $ V / m $.

If you perform a dimensional analysis on the Fourier transform expressions above, you can see that the normalizing constant $ A $ has to have units of $ V \times m $. For example, if $ \text{PSF}_A $ has units of $ V / m $ and $ dx $ and $ dy $ both have units of $ m $, then $ A $ has units of $ V \times m $ and the pupil function is therefore dimensionless. Sometimes in the literature you will find that units or a normalizing constant are ignored or, worse, that the reader can sort of "fill them in" later. I prefer to be explicit and to define the $ \text{PSF}_A $ to be a field.

Pupil functions are not entrance or exit pupils¶

The pupil function and the pupil planes of a system are not the same thing. The entrance and exit pupils--which together are known as the pupil planes--are the planes in which the images of the system's aperture stop are located. The pupil function, however, is not an image of the aperture stop of the system; it's a 2D Fourier transform of a field.

The goal of this simulation will be simple: given a pupil function, a single wavelength, an optical system with a numerical aperture NA, and an amount of power that passes through the image plane, compute the image of an on-axis isotropic point source.

There are only a few steps needed to achieve our goal:

With this in mind, we'll start by importing a few scientific libraries like Numpy and Scipy.

Next, we need to define a few parameters that will determine the output of the simulations. These parameters are:

Note that pixel size is defined as the size of a pixel in the object space. Defining it like this is often more intuitive than defining the pixel size in the image space. For example, when you see a scale bar on a microscopy image, the distances correspond to object space distances, not the actual distance that the image spans on the piece of paper or computer screen. Furthermore, there is no problem with working with an object space pixel size in the image plane since the coordinate systems in the object and image planes of our perfect optical system can be easily mapped onto one another by a linear scaling by the system's magnification.

We don't neccessarily need to use a camera as the detector. Since we are limited to working with discrete arrays in the computer, though, it's convenient to say that we have a camera as a detector since each pixel is a discrete sample of the field.

In addition to the above parameters, we'll assume that the object, the imaging system, and the image plane are all in air. We'll define a constant $ Z_0 = 376.73 \, \Omega $ which is known as the impedance of free space or the vacuum impedance. This is the constant of proportionality between the power carried by the scalar field and the integral of its absolute square in the image plane:

Of course, air does not really have the same impedance as vacuum, but the two values are close enough. I have also used $ P_0 $ to denote the power because I already used $ P \left( f_x, f_y \right) $ to denote the pupil function.

Since we specified the pixel size and the number of pixels, it's easiest to start with the image plane coordinates. We will define the origin of our coordinate system to lie at the center of the array, which, for an even number of pixels and array indexes that start at zero, lies halfway between the pixels $ \left( \frac{\text{numPixels}}{2} \right) - 1 $ and $ \left( \frac{\text{numPixels}}{2} \right) $ in both the horizontal and vertical directions.

With the image plane coordinates taken care of, the next question is: what are the pupil plane coordinates? This question is a frequent source of frustration for students (and full-time scientists). I won't go into the details in this post, but instead will just tell you the two rules you need to remember for Fourier optics simulations

$ f_S $ is called the sampling frequency and is equal to one divided by the spacing between image space coordinates. We can go ahead now and compute the frequency-space coordinate values.

In nearly all imaging systems, the pupil is circular because its optical elements are circular. The radius of the pupil function is the ratio of the system's numerical aperture to the wavelength of the light, $ \frac{\text{NA}}{\lambda} $ (Hanser, 2004). Perfect systems like the one we are modeling here have a pupil with a constant value everywhere inside this circle and zero outside of it.

We can simulate such a pupil by making a circular mask with a radius of $ \frac{\text{NA}}{\lambda} $. The mask is one inside the circle and zero outside of it.

Define the power carried by the scalar field¶

I mentioned in the theoretical background above that the total optical power carried by the field is the two dimensional integral of the absolute square of the field divided by the impedance. If we want to set the power as an input of the simulation, we need to first normalize our pupil values by this integral.

Now that we have the pupil, we can perform a numerical integration over it using Simpson's rule to find the normalizing constant. We then multiply the pupil by the square root of this constant times our desired value for the power to set the total power carried by the field.

Step 4: Compute the image of the point source¶

With the pupil and coordinate systems established, we are now ready to compute the image of the isotropic point source that this system produces.

To do this, we need to perform a few easy but important steps. In the first step, we will shift the origin of the pupil from the center of the array to the array indexes $ \left( 0, 0 \right) $ using the ifftshift() function. The reason we do this is that fft2() expects that the zero frequency value lies at the origin of the array. The two-dimensional FFT of the shifted pupil is then computed, producing a new array with the zero frequency at array indexes $ \left( 0, 0 \right) $ and the Nyquist frequency $ f_S / 2 $ in the middle of the array's axes (numpy.fft.fft2 - NumPy v1.11 Manual, accessed on 2016-11-15). We finish by shifting the origin back to the center of the array using fftshift() so that it makes sense when we visualize the results.

The final step is to multiply the result by the square of the spacing between frequency coordinates. This step ensures that the power is preserved during the FFT operation (Schmidt, 2010, pp. 15-18).

The image is the irradiance in the image plane, which is the absolute square of the field, divided by the vacuum impedance. Its units are power per area, or in this case $ W / \mu m^2 $. In optics, the irradiance is what is measured by a camera, not the field.

Above you can see the image of an isotropic point source. The image is not a point but rather a blurred spot in the center of the image plane due to diffraction at the pupil.

The first thing we can do to check whether the above result is correct is compute the power over the image above. By Parseval's theorem, it should be the same as the integral of the normalized pupil function divided by the vacuum impedance.

So far so good. The next thing that we can do to verify these results is to calculate the sampled values of the analytical solution to this problem. Scalar diffraction theory predicts that the solution for the irradiance of the field diffracted by a circular aperture is an Airy disk:

Now we can go ahead and visually compare our image plane calculations with the airy disk. If we subtract one from the other, we should get all zeros.

From the plots above you can see that the simulations perform pretty well at finding the image of the point source. In fact, the differences in the final irradiance values differ by at most a small fraction of a percent.

However, the pattern in the difference image is not random, so these differences are probably not round-off errors. In fact, they come from the minor but important detail that we are calculating a discrete Fourier transform with the FFT command, whereas the theory predicts that the point spread function is a continuous Fourier transform of the pupil.

Isotropic point sources are also an idealization of reality. Single fluorescent molecules, for instance, do not emit light equally in all directions but rather in a pattern known as dipole radiation.

Finally, the optical system as modeled here was a linear, shift-invariant system. This means that the same pupil function can actually be used to compute the image of any off-axis point source as well; we would only need to apply a linear phase ramp to the pupil to account for this. Real optical systems are only approximatley linear and shift-invariant, which means that a more complete model would assign a different pupil function to each object point. This then allows for aberrations that vary as a function of object position, but requires more information to fully describe the system.